Services of a Lady Mortician

One day many years ago as I was sorting through a box of old papers, I stumbled upon a home economics manual of sorts which had belonged to my grandmother.  It dated to 1929 and was full of recipes as well as household management tips but what got my attention the most was one of the advertisements within it.

Services of Licensed Lady Mortician, the ad read, and I began to wonder why the woman felt that it was to her advantage to advertise her gender within this particular field.  So I did a little research into it and found that in 1929 there weren't very many female morticians.  And then that led to another question.  Why not? 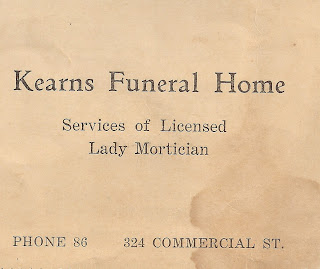 From there, the search for answers led all the way back to the Colonial period of American history when the situation was exactly the opposite.  Beginning with the earliest settlements of this country, women were the ones who usually attended to the human remains of the dead and prepared the bodies of loved ones for burial.  Mothers taught their daughters from a young age what needed to be done when a death occurred and it was generally acknowledged to be women's work even though the menfolk would have their assigned tasks at the direction of their female relatives.  And it continued on in this way for a very long time.  In fact, during the Revolutionary War, General Washington  issued an Army requisition specifically seeking women to handle the dead who had perished in battle.

But then in the 1800s things changed.  As public health needs began to be addressed more aggressively,  good sanitation habits were promoted on a national level and the medical field came into its own as a respected profession that required at least a rudimentary formal education.  Before this, many people perceived doctors, especially male doctors, to be less effective than the local healing women who tended to the sick with their arsenal of home remedies and natural cures.

And, in truth, this perception was well justified because in many instances, early American doctors more often than not hastened the end of their patients with medicinal cures that would shock us today.  However, America was not immune to the effects of the European Enlightenment and soon the reliance upon science overcame the centuries-old wisdom of herbal treatments.  Doctors, almost all of who were men, were schooled in the sciences and therefore became to be regarded as more qualified to treat the ill than uneducated healers who were predominantly women.

Among the medics who served during the Civil War and afterward, when the spirit of entrepreneurialism swept across the country, there was more than one shrewd fellow who noted the popularity of embalming and recognized what a lucrative business opportunity it was.  With this commercialization of an aspect of post-mortem care, embalming transformed American mortuary practices not only by preserving the bodies of soldiers until they could be transported back home to their waiting families but also by helping to expand the growing mortuary profession and to justify charging fees for funeral preparations.  Because embalming necessitated a certain amount of formal training as well as the specialized use of chemicals, its cost was perceived to be worthwhile since this was a service which the average family could not perform in their own home.

With the opportunities for education and formal training of any kind being very limited for women at this time, it is no wonder that few women became doctors or learned how to perform embalming techniques.  And as embalming continued to be closely associated with the mortuary trade, it naturally followed that women's roles in post-death duties would diminish to the point where they were practically nonexistent (except for remote rural areas and within Jewish communities) since women were strongly discouraged from both pursuing a career outside the home and from owning their own businesses.

To add to the alienation of women from the growing funeral business, by the late 19th century the Victorian Age was dominating the American culture with its emphasis on the delicate and weak nature of women.  Women were expected to stay within the home, to manage their households and to raise their families.  They were most definitely not to be exposed in any way to anything as morbid as a corpse.  Nor was it considered proper that a woman should view an unclothed man, whether he was alive or dead, so the trend continued where, as the mortuary field grew, it became almost completely male dominated.

And so it was until the beginning of the 20th century at which time women's independence movements gained momentum.  For years, organized groups of women lobbied for the right to vote but their efforts really got a boost in 1912 when Theodore Roosevelt's Progressive Party condoned women's suffrage.  This wave of feminist activism extended to many arenas, not least of which was the right to pursue careers  and, as a result, out of this shift in gender segregation was born the re-emergence of women into roles which had long been denied to them.  Coming full circle back to the traditional tasks of preparing the dead for burial, women began to attend mortuary colleges and to take their place among their male peers as funeral directors across the country albeit in small numbers.

However, unlike two centuries before, they were now fulfilling this role under different circumstances.  Women were once again caring for the dead but they were doing so as a paid job rather than as a domestic duty. Moreover, bodies were now prepared for burial outside of the home and by people other than family or neighbors.

And therein is the answer to my question as to why it came to be that a woman would advertise both her gender and her profession when soliciting business within the funerary industry in 1929.  In essence, the history of post-mortem care in this country developed into two intertwining paths from the 17th century to the 20th century.  On the one hand, there was a change in the dynamics of how that care evolved, from a personal home-based task to an impersonal business transaction whereby strangers assumed the duty of preparing remains for burial.  And, on the other hand, there was the dramatic change in gender roles within that specific industry.

By 1929, the Roaring Twenties had done much to emancipate women from the limitations imposed upon them from generations of gender discrimination and they were not only entering male-dominated careers but by advertising to a largely female audience within home management guides, women were also making the statement that, to a certain degree, they were reclaiming their long-lost role of preparing the dead for their final resting place. 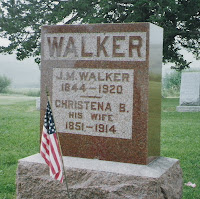 Posted by Gia Oldman at 6:19 PM No comments: